It seems if a book is touted as a great classic, then it shall be made into a movie. Beowulf is no different, and if you aren’t familiar with this English literature, then you probably recognize it from the 2007 movie version which starred Angelina Jolie. I haven’t seen the movie, but I have read the epic poem. Unfortunately, I barely remember it,  so today we’ll take a brief look at the plot and the significance of Beowulf.

Beowulf is a young prince from Geatland (a place south of Sweden) who arrives unexpectedly with a group of armed men to a Danish town. This town, belonging to King Hrothgar, has been continually terrorized by a monster named Grendel who breaks in at night and devours the King’s warriors. When Beowulf and his men arrive, they fatally injure Grendel who then runs off to his swamp to die. Grendel’s mother tries to avenge her son’s death, but Beowulf is able to find her at her lair and kill her first. There he sees Grendel’s corpse and decapitates it to bring the severed head of the monster back to Hrothgar’s town. The Danish town cheers and celebrates when Beowulf returns with Grendel’s head and rejoice over the fact that their town is now monster-free. Eventually, Beowulf returns his hometown of Geatland as a hero. Soon after, he takes the thrown and rules for fifty years. A hero to the core, Beowulf protects the Geats from a terrorizing dragon, but it is in this same battle that he is fatally wounded. The Geats burn Beowulf’s body in a large funeral pyre and bury him with treasure. Thus, the story of Beowulf ends. 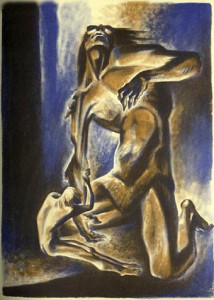 What’s the significance of Beowulf?

So why has Beowulf persisted as one of the great works of literature through the ages? One reason is that the story portrays a mix of pagan and Christian traditions. Set around 500 A.D. in, a more pagan era, the story’s characters often exhibit many Christian thoughts and beliefs yet their action do not always match this.

Beowulf is often introduced as the first great influence on the development of English literature. Although many scholars stand by this, it was not actually wide read until the 1800s.  Regardless, it still holds great historical and literary value. J.R.R. Tolkien, writer of The Lord of the Rings, was heavily influence by Beowulf.

So the next time someone brings up Beowulf or makes an allusion to it (you never know!), you’ll now have the basic idea, and be able to give a smart, little reply back.

13 thoughts on “The Great Books: Beowulf”