David McCandless discusses the beauty of data visualization . . . before you say, “This doesn’t sound like something I’d ever care about,” let me put it another way. He can tell you when you are going to get dumped.

The video is all about making numbers more relevant. Presenting the actual data in a way that tells the story you need to know rather than the dry statistic. He makes an otherwise almost unbearable statistics world come to life in storyboard form.

An example of what this might look like in the world at large based on a topic we’ve discussed here before – Gender and Mathematics skill level.

Have you heard that girls are bad at math? Many of my female students have, but that’s not the whole story. Take a look at this chart. 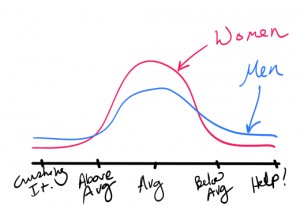 The reality is, at the extremes, men outperform. At the extremes. In other words at the very top end and at the very bottom of the math skill range, there are more men. But looky here in the middle of the range. More women do better through the average and above average ranges than men do.

So the story isn’t that women are bad at math. Far from it. On average, women are better at math than men. BUT, at the top end of the range, the very highest math skill levels, there are twice as many men as women. A totally different story.

Turns out it isn’t that boys are smarter or dumber, it’s that several brain focused genes sit on the X chromosome. Girls have two Xs and as a consequence can mute the extremes. Boys have one X and one Y and therefore cannot mute the extremes. Boys will demonstrate more variability than girls as a consequence. This translates to twice as many men in the top 1% AND twice as many men in the bottom 1%.

His TED talk is inspiring. Loved the bubble graph at minute 13. Enjoy!

For a better understanding of data – how to read and interpret: The Flaw of Averages, by Sam Savage
For more on the the educational testing gap between boys and girls (8th graders): National Assessment of Educational Progress