It is easy to get caught up in your typing. It starts by reversing the h and the t in the. Spelling errors just happen. Then you start dropping a comma here and there. Next thing you know ur ritng n txt spk. 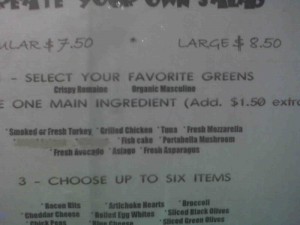 I’m a bit more of a stickler when it comes to intended punctuation and spelling. A little structure adds to civility. A paragraph is much harder to read without structure. Decent spelling ensures I see your intended message.

Please fix the website – I understand your request (well, kind of understand…)

So let’s celebrate spell check and avoid those spelling arrows. What until you see the math whopper I found in Rite Aid . . . they need to hire a math teacher asap!

CAN YOU FIND THE SPELLING ERROR IN THIS PHOTO?

What you know can indeed hurt you. Twitter has not only coined a new verb, to tweet (tweet, tweeting) and a new noun, Tweeter, one who tweets, but also created an environment for snoops to learn far more about you than you may ever want learned….

With the crazy popularity of Twitter and Facebook, private investigators are no longer needed to dig up the goods. The Financial Times interviewed divorce attorney, Linda Lea Viken who is apparently a fan of the services.

Facebook dirt even came up on the most recent season of the Bachelorette – Justin, the crazy Wrestler dude, had told his girlfriend at home to stay off Facebook . . . apparently he had another gf on Facebook. And both ladies knew he was “chasing” Ali on the show . . . um, hello . . . red flag anyone? Anyway, when non-Facebook gf signed into the service she discovered the ruse. Justin hobbled off the show through shrubbery to avoid Ali’s wrath.
Justin into the shrubbery, 40s

If you think that private message are not admissible . . . think again. That’s why the attorneys are having a field day with social networking sites. Most of the information is super public – as in, anyone can see it at anytime – even if you have a privacy setting (“only show wall to friends,” etc.) and what is not super public requires very little work to uncover. All of it is considered admissible in court should you ever need know that….

But, you’re not worried about having an affair discovered, you’re just a regular joe or jane working to pay the bills, trying to make a good life, right?

It’s even worse for you!

HR departments are using the sites as well. If you have hopes of executive level appointments, you’d better be particularly careful. Look at what happened with Mark Hurd, the former CEO of Hewlett Packard. He was accused of misconduct and relieved of his post when it hit social sites. The fiasco started in April and agreement was reached by both sides by June without any fanfare – the Board was already well aware of the situation. But it was leaked to the media and then spread like wildfire in July. Miraculously, the Board was no longer able to see Mark as credible . . . I can’t see that Board as credible, but that’s a different bone to pick for a different day.

What you say, can and will be copied and pasted across the kingdom.

Two of the great civilizations of the world – Sparta and Athens – warred with one another for 200 years. From 550 to 350 BC, the two cities found themselves in frequent battles.

Sparta, a small city in southern Greece, was a powerful military force. Strong, fearless, and known to toss unfit babies into gorges. Their men went through grueling training, and Spartan boys were tested on their toughness by enduring whippings. They were fearless warriors on land.

Athens, on the other hand, differed greatly. Known as the birthplace of democracy, the Athenians way of life  was far more laid back than that of the Spartans. It was a city rich in culture, philosophy, art,  and science. Athen’s accomplishments in these areas are one of the most extraordinary in human history. People such as Plato, Sophocles, Euripides, Aristotle, and Socrates sprung from Athen’s grounds. The Athenians were masters of sea time battle.

Despite the greatness of both civilizations, the two warring civilizations dominated the history of Ancient Greece. At one point, the two joined forces to defeat 2 attempted Persian invasions. Once accomplished, though, Sparta and Athens went back to competing against one another for leadership of Greece.

Not until Philip of Macedonia invade from the North did Sparta and Athens finally cease fighting. Philip’s invasion took over the city-stats and their empire. Philip and his son Alexander the Great would go on to conquer many more lands throughout Greece and Asia.

The United States Marine Corps has been America’s best fighting organization since November 10, 1775. Known for its fierceness, efficiency, courage, and outright ability in defending America, the Marine Corps is synonymous with winning and bravery.

“Some people spend an entire lifetime wondering if they made a difference. The Marines don’t have that problem.”    ~President Ronald Reagan, 1985

“Tell that to the Marines!” ~ President Franklin D. Roosevelt after the attacks on Pearl Harbor

A special thanks to the few and the proud…the United States Marine Corp – Happy Birthday!

Well, it seems Monday has come once again a lot faster than I predicted. This last weekend was busy with a friend in town and another friend’s birthday. It seems another “Sunday” is always needed after the original Sunday. Luckily, I went to bed at 9pm last night. Going to bed early is one of my favorite Sunday night activities. Sleep is so important for having mental clarity on Monday morning and starting your week off right – so what exactly is it and why do we need so much of it?

Sleep would seem like an anti-evolutionary trait since we spend so much time doing it, and it leaves us vulnerable for predator attacks. Yet, if a person were to go longer than 2 weeks without sleep, he/she would die. We all know that lacking just one day of sleep leaves us groggy and disoriented. Make it three, and delirium is sure to set in.

Although we are not exactly sure why sleep is so important, we do know that during this time our thoughts re-organize, our muscles and organs restore themselves, and we build memories.

There are also 5 different stages of sleep. See below. (*taken from Discovery Health)

Want to know some other interesting facts?

– Whales and dolphins only sleep 1/2 of their brain at a time. Therefore, if they are sleeping, one eye will be open and the other closed.

– Getting too much sleep (9 hours or more) or too little (6 hours or less) gives a person a 30% higher death rate than those who sleep regularly every night.

It seems getting your beauty rest is just part of the sleep equation, and there’s numerous reasons why we should sleep more. Don’t worry if you didn’t catch up on all your sleep during the weekend, there’s always tonight to get your full 8 hours. Happy Monday!

If you are a true puzzle fan, well then boy do I have a treat for you. The object of this game is to turn all the boxes red. It seems easy enough. When you click on a box, it turns the square you clicked on and it’s diagonally adjacent squares red. Essentially it makes a cross shape (+). Try to click on all the right squares to have the puzzle be perfectly red.

Give it a shot! It takes some thinking…….

We’re going to do some more mind exercise today. Don’t let the name “Wacky Wordsearch” fool you, it’s more challenging than the name lets on. I think we all know how to do word searches, but this one has a twist. You get negative points for circling the wrong words or letters.

Aristotle’s Metaphysics is one of his most well-known works. His ideas led to a new branch of philosophy which influenced the thinkers of his time and thereafter. The word metaphysics literally means ‘after physics’ as it was chronologically written after the books on nature. His work focuses on reality, existence, and being in terms of what it is. For example, a metaphysical philosopher ponders “What is the world?” while a physicist poses the question “How does the world work?”. 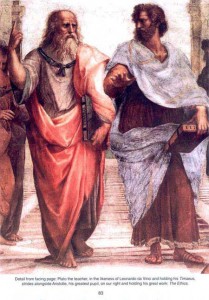 Metaphysics is the study of all reality including the natural and supernatural. The natural world is identified as things which can be scientifically proven (energy, matter) whereas the supernatural world is identified as things which cannot be scientifically proven (the existence of god). It is the study of the world which we can – and – cannot see. Although when people use the term today, they often overlook the natural side and use metaphysics as a way to question reality from a supernatural standpoint.

There are two main questions of metaphysics. The first one asks, “What is reality?”. In asking this, metaphysical philosophers search for the underlying rules and principals of existence. They hunt for the common thread that proves and binds reality – those things which are unchanging. The second question asks, “What is the real reality?”. This contrasts from the first question as it is focuses on discovering ultimate truth. Often times, this can contradict to the world as we perceive and experience it.

Metaphysics is difficult to define as it is broad in its scope and can include the sciences. Most notably, cosmology is aligned with metaphysics and aspires to identify the very beginnings of existence. It is not only a western philosophy but can also be seen in Buddhist and Hindu philosophy as well.

Hello all- For Thursday’s puzzle, how about a game of sudoku? I’ll admit, I’m not the best at this, but I do see it’s benefits.  Plus the more you play, the better you get. So do a little mental exercise, and get your mind active. Once you finish, you’ll get that deep down feeling of accomplishment. Enjoy!

Louis XIV (1638-1715, known as the Sun King , ruled France for seventy two years starting at the young age of 4. During his time of rule from the  awe-inspiring Palace of Versailles, Louis XIV was able to expand French influence in Europe and centralize and strengthen its powers at home. The absolute monarchy which Louis XIV built held more power than France had seen in its history as well as eliminated what was left of feudalism.

As King, Louis XIV knew that France’s power was divided among a handful of rich noblemen who reigned over vast parts of the province. In order to gain their trust and compliance, he built his image as that of magnificent and glorious. By association, they too would seem glorious to others by sharing his presence, and thus, when Louis offered the wealthy noblemen to come live in his grand Palace of Versailles, they would accept. This avoided another Fronde (civil uprising of nobles against the French monarchy), and the noble elite were appeased. Louis also built palaces across France as well as expanded Versailles making it the most lavish and magnificent palace in Europe.

Louis’ ambitious ways  gained him unprecedented power, and he was able to even convince the Catholic church to allow him more control. One of his most famous quotes – “I am the state.” -portrayed Louis’ vision of himself as France. There was no separation between the two, and so having the Church under his power seemed fitting to him. Louis XIV tried to foster religious unity often resulting in persecution of others such as Protestants and Jews.

Four days before his 77th birthday, Louis XIV died and left behind a great legacy. Although he led France to strength and power, his absolute monarchy also led to tyrannical behavior which would alter result in the French Revolution in 1789.