Star explosions are interesting. Star implosions also make equally interesting topics to explore. The kind of star implosions I’m referring to in particular are black holes. If you’ve ever seen Star Trek, you probably have an image in your head of a space ship swirling into a dark, black abyss. That can serve as a starting reference point, but other than the fact that a black hole has a strong gravitational pull, there’s not much more accurate information you can take away from that depiction.

So let’s begin. What is a black hole? A black hole is a result of a star imploding into itself and collapsing down to nothing. Its gravitational force becomes so strong, that no matter can survive it. Inside a black hole is nothing, except for “a little nugget of singularity” as physicist Kip Thorne puts it which we don’t understand. This point of singularity is a result of the dying star continually collapsing into itself, becoming denser and denser, until it is a point with no radius and infinite destiny. Nothing escapes the black hole, not even light.

If light cannot escape the black hole or its event horizon (the border of the black hole where the gravitational pull sucks in surrounding matter), then how can we see it? Technically, we can’t. We observe black holes by observing the way they interact with the objects in space around them. 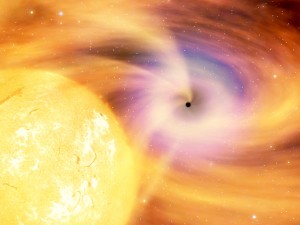 OK, so the question you really want to know: Can we space or time travel through a black hole? You know….the way they do in Star Trek. This idea is not as far fetched as you may think. Some physicists (like Burko in particular) argue that if a black hole has a weak point of singularity, it isn’t out of the question. A weak point of singularity means that it won’t completely crush you or your space ship if you enter, and it may lead you to a wormhole (a tear/tunnel in the space time continuum) and spit you out in some remote part of the universe. Though this idea is very theoretical, there is no evidence to completely disprove that it may work. In science, that counts as a possibility. The closest black hole being 30,000 years away, though, serves as a much bigger problem.